I received the amplifier kit from Communication Concepts today!  Here's what I found when I opened up the box: 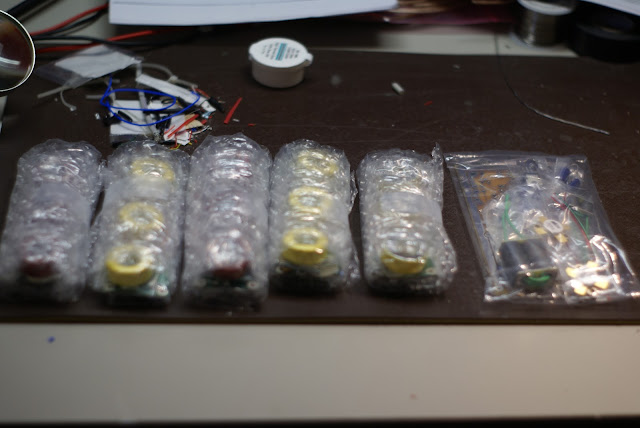 On the left are the 5 band filters with the amp and parts to the right.  I was happy to see that the 3 transformers on the amp were pre-wound for me, which is nice since those are a bit special.  Luckily, there's still a few to wind for the filters!  It wouldn't be a real kit if I didn't have to wind any!

I had scheduled some time with Rod, K0DAS, to help me drill and tap the heatsink for the board but he wasn't available right away so I put together the 20m filter while I waited.


It didn't take long for Rod to get back with me and I took the parts over to his QTH and we worked on drilling the holes for the amp.  It went fairly well and we got everything looking nice.  Only mistake we made was drilling the board mounting holes for 6-32 screws.  No big deal, we got the important ones right (the ones for the transistor tabs). We just drilled out the other holes to fit the bigger screws. I forgot to take a picture of the bare board mounted on the heatsink...oops!

Next, to start on the amp itself.  The "build notes" from CCI are little more than just that, notes.  These are not really "kits" in the traditional sense.  The build notes do outline generally how to assemble key parts of the board but do leave out some of the common details that might be included in a detailed, polished manual for example.  Keep that in mind if you are considering this journey in the future!  The initial assembly goes through the whole board minus the actual final transistors.  The last step before their installation is setting the bias current (and voltage).  It is very critical to set this correctly or else you will run a very serious risk of damaging the finals and they're $90 a pair so, play safe!

The assembly was pretty straightforward but the instructions did leave out a couple parts near the end - namely a couple of surface mount caps that go on the bottom of the board.  Once I figured out where they belonged, it was no problem.
So with great trepidation, I applied power for the first time, monitoring the bias voltage across a 50 ohm resistor as requested in the build notes.  For some reason I was not getting anywhere close to the expected voltage.  Looking around I quickly found that the transistor and resistor in the bottom right of the board were getting very, very hot.  Something was clearly not right.  I inspected all the joints and part values and didn't find any issues.  Then just as I was getting frustrated, I spotted it, a tiny pinhead solder splash that crossed the bare board and must have been shorting the power rail to ground.  Once I flicked that off, the bias voltage came right into spec and the aforementioned parts were nice and cool too.

I applied thermal grease to the underside of the transistors and the thermal reference transistor (used as a PN junction) and bolted it all together.  Remember, a little bit of this stuff goes a long way and I bought a big jar (a couple ounces) which is enough for 50 amps.  Since my band switch is coming from China, it isn't here yet so I decided to just wire up the 20m filter directly to the amp for now.  Also, not having a chassis, I used the standoffs I had and threw it together like this:
I timidly applied some RF while watching the output on an old MFJ tuner just to get a reference and sure enough, it was amplifying!  I also had the voltage meter on the KX3 up so I could see the supply during keydown.  I was surprised to see the voltage dipping quite a bit even though the power supply I'm borrowing is supposed to do 23 Amps continuous.  I'm thinking that spec is a bit generous.  Anyway, after some more testing and hooking it up to the scope, it looks like I'm putting out about 75+ watts with 5W of drive, maybe more.  I ordered a Powerwerx SS-30VD so hopefully it will be able to run a bit higher output with that.  Even if not, 75W is a big improvement over 5W, and the RBN spots prove it
I ran the amp like this a bit but it became pretty clear that this was a pretty poor setup for heat dissipation (the worst case one in fact) so the next day I decided to flip it over somehow.  I don't have a good case for it yet but luckily I did have the aluminum box from the antenna tuner I picked up at the junk in the trunk event in the Spring (see post about that here).  I have been working on getting that tuner cleaned up and serviceable but it'll have to wait for now.  Now, let me tell you, this chassis really makes the amp.  It looked pretty bad before, but now it looks like a real homebrew project!
Way cool right?!  Yeah, its not as streamlined or sexy as the KX3 but I'll be darned if it doesn't look like a real homebrew piece of artwork!  Ok, there's more work to be done, but this is going to work great for the short term, at least until the band switch arrives.  Until then, I have some more filter boards to wire up and QSOs to make!

PS: I intended to do a little video but my camera(s) were not cooperating last night so this will have to do!  Watch Twitter (@w0ea) and subscribe to my YouTube channel to keep an eye out for the video which I will post later!
Posted by TJ Campie at 1:17:00 PM