An EFHW Matcher in the Style of Par End Fedz

EI've had a PAR End Fedz antenna since I had my K2 (it came with one direct from Dale Parfit himself) and used it extensively for portable use for a long time.  Since then, I built (and blogged about) a AA5TB style EFHW matcher that uses a fixed coil and a variable capacitor on the high impedance side of the circuit.  That post is here: http://w0ea.blogspot.com/2012/08/aa5tb-end-fed-half-wave-tuner.html

With my MTR project wrapping up, I thought I could retool the Par antenna to make a really tiny and lightweight EFHW even more minimal than the one I built before.  The idea was to replicate the PAR matcher since it does not require a big, variable capacitor.  Luckily someone had already torn into that black box and found what was inside.  (that article is here)  I stole his nice graphic depicting the circuit, it'll also take you to the article. 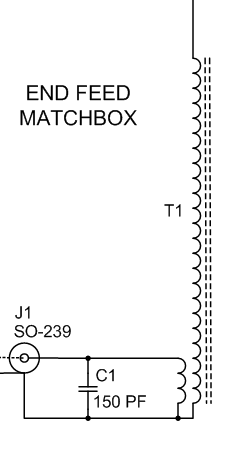 It is very simple: a 150pF shunt capacitor and a 9:1 transformer (3 primary turns, wound bifiliar, 27 secondary turns).  The article mentions that the commercial unit uses an FT87-43.  I built mine with an FT37-43 because that is the smallest I had on hand.  The raw circuit built up is below:
Once I proved the concept worked, I did some brain storming and figured out the perfect housing for this little devil: the screw on part of a PL-259 connector.