End Fed Half Wave antennas have been all the rage in QRP the last few years, and rightfully so, they are high efficiency, easy to deploy, and the simplest and lightest antenna you can pack.  Many of us have been using the PAR EndFedz line (originally created by Dale Parfit, W4OP, now carried by LNR Precision) with great success.  I have one of Dale's older QRP 10/20/40m models and it worked great for a long time but lately, for some reason, it does not want to tune up on 40 so I've been sticking to a random wire instead when in the field.  I'd like to go back to the EFHW and I've always wanted to build one of those fancy EFHW tuners so I set off to do that yesterday.  The missing link has always been the polyvaricon - a small variable capacitor often found in old transistor radios and the like.  You can buy a set of 4 off of QRP Kits but they are pretty pricy.  Luckily, a friend of mine gave me an old Sanyo shortwave receiver a while back that was not working too well so I tore into it and was pleased to find a nice dual section polyvaricon, ripe for the taking. 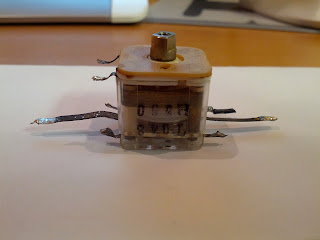 There are a bunch of other parts on that board that might be nice to have too: lots of can inductors, good looking caps etc.  May have to rip this thing down further yet.

So now with the key component in hand, I could really get this thing going.  The design I used was featured on AD7BP's blog.  It was originally designed by AA5TB. 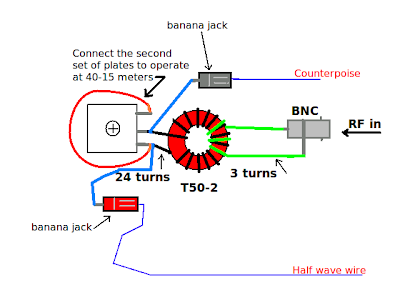 As you can see, the design and construction are pretty foolproof.  Here's my hacked together job: 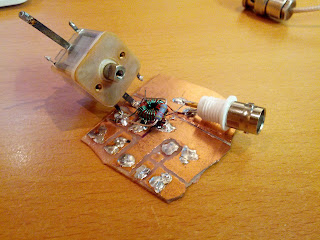 I've got a 4.7kOhm resistor across the output for testing purposes and was pleased to find that I could get 1.3:1 SWR on 15-40m.  Not too shabby!  So I went ahead and boxed it all up nice and pretty and here's the end result: 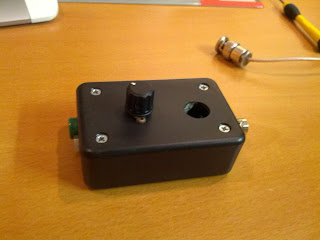 Looks pretty sharp!  I have not yet tried it on a real EFHW antenna but it does tune my doublet really well on 40m so apparently that is a pretty high impedance antenna there!

You might note that there is no SWR indicator on this tuner.  After chatting with AD7BP, he said he didn't think you really need one and he's probably right.  His argument is that the peak is so sharp that it is pretty easy to hear the SWR null and if you can get close enough, it will be within the tolerable range for most radios.  In my brief testing, I found that to be the case but we'll see once we are using real wire!

Look for an update on the next portable outing!