I've been playing with magnetic loops for a while and I have yet to perfect the science but I'm wanting to do some stuff with my MTR and a small loop on the deck for instance.  The problem there is the MTR's receiver is so quiet, I can't tell when I've got the loop tuned like I can on the KX3 with the pre-amp on.  Knowing this and that the MTR is a little sensitive to high SWR, I've been avoiding too much playing around since I have to take the KX3 to act as a REALLY fancy SWR meter.  Well that all may be over with now.

Dan Tayloe, N7VE, developed a really neat resistive SWR bridge that uses a simple LED to identify the dip in SWR on an antenna.  QRPkits.com sells a nice kit of the bridge for just $15 and I recommend that if you don't already have the parts in your junk box.  I got really lucky and found some 57 ohm resistors in an old shortwave radio I tore apart and I had the rest of the parts in my junk box (minus a DPDT switch).  A schematic of the bridge is below (credit to QRPkits.com)

It isn't a complex design by any means but the unique part is that it gives the transmitter a matched load regardless of the actual impedance of the antenna, protecting those precious final transistors!  Since my implementation uses 1/4w resistors rather than the 1 or 2 watt ones you get in the commercial kit, mine is probably limited quite a bit power wise but I didn't feel any heating in the testing I did at 5w, and you don't really need lots of transmitting time to identify if the LED is on or not.  Here's what mine looks like: 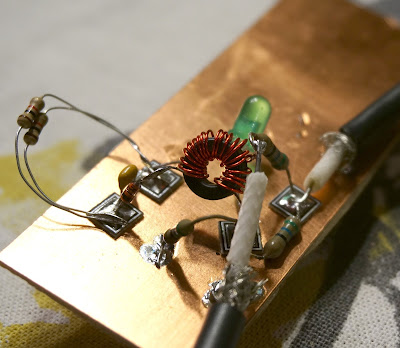 Since I didn't have a 470 ohm resistor, I just used two 1k resistors in parallel.  Not fancy, but it works!  To test it out, I put my mag loop at the antenna end and plugged the MTR into the input.  Sending a few dahs, it was very obvious I was out of tune.  I continued sending dahs into the bridge as I tuned the capacitor on the loop and sure enough I found the dip in luminance on the LED, it was very obvious.  I then swapped the antenna to the KX3 to see how close I actually got to the SWR I wanted and I was absolutely shocked to see that it read 1.3:1.  The dang thing actually worked!  Always a great feeling when something you kluge together on your bench works like its supposed to!

So now I've got a bridge that works but it does need a switch to be truly useful since you don't want to have to plug it in/unplug it every time you want to test SWR.  The coax you see in the picture is unterminated too, they're just going into a couple banana-BNC adapters so I'll have to decide how I want that to work too.  Anyway, it works so you can be sure you'll see an update on this in the near future as it gets some real world use.
Posted by TJ Campie at 9:43:00 PM