I made a goal for 2012 to blog more, well look how that has turned out!


I have been pretty busy building, playing, cleaning, fixing, updating, etc. so have not put the time I need to into the blog.  Consider it a "stretch" goal! (more after the break)

So to update: I'm still awaiting the delivery of my new KX3 kit.  It has been a long and arduous process which I do not suggest or desire for anyone.  Elecraft makes a great product that is unmatched but they really need a PR person.  Current status shows kits will begin shipping en masse on Friday, May 11th so we'll see.  That may mean my KX3 will be here before the end of May.

Luckily, the QRP evangelist wG0AT, Steve, was the first to receive and build a KX3 kit and arduously posted photos of his build to his Google+ account.  Looks like it'll be a great build and Wayne, N6KR (the designer) suggest it should be about a 2 hour build.

A few weeks ago I stumbled upon a super deal on a used iMac at work that had a broken DVD drive which I picked up for a steal.  It has been relegated to use by the wife and I have re-claimed my 1 year newer iMac for use in the shack.  It has been a really pleasant addition to have a full time computer at the operating position.  Formerly, I was taking my 13" MacBook up and down and sometimes would forget it or the battery would be dead.  This addition has also helped me move away from my paper log.  While I really enjoyed writing the contacts in the log, translating them onto the computer for upload to LoTW and eQSL was a major pain.  Now with automatic frequency, date, and time entry in the logger, this has all become very simple.  The application I've found to work best with my operating style is called RumLog (available here).  It even has a nice K3 (and presumably KX3) control window with which you can control many of the front panel features.  It also has lots of built in features for award tracking, DX spotting, greyline, propagation reports and so on.  Of course on the logging front, it supports LoTW and eQSL direct uploads and downloads so now I can update both daily in about 30 seconds vs the 30 minutes I usually had to devote to typing in contacts by hand.  It also has a sister application called RumPed which is a contest logger.  I've used a few contest loggers including N1MM and WriteLog and I much prefer N1MM in this case.  I did use RumPed for one contest last year and it worked fairly well but its user interface is not as simple to understand or use when compared to N1MM.  I have not tried to see if N1MM could run in CrossOver or another visualization software yet, but I'll have to do that sometime. 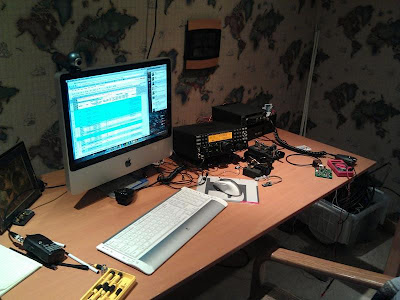 As is customary in April, there was another running of QRP To The Field (QRPTTF).  I had planned on using my KX3 for this contest but since it had not arrived yet, I sarted to get a bit panicked!  Luckily I was able to do even better (sorta): NZ0R, Craig,  let me finish a K1 kit he had purchased partially built.  So not only did I get to operate in the contest,  I got to melt some solder too! SWEET!
The rest of the kit came together without any problems and I had it on the air within a couple hours then started to gather up my kit for the contest, which I captured in video:

My trip to Bever Park was a quick walk from the home QTH.  The goal of this year's QRPTTF was to "get high," as in get up in elevation and was teamed with Summits on the Air (SOTA) so I went to the highest point in the park, aptly named Zoo Hill and set up shop.  I honestly forget what I used for an antenna but I think I hooked up the Par End fed 40/20/10 for this one.  I've been having problems with that antenna on 40m for some reason so I have since tried a 42' long wire which seems to be working much better for just about all bands 40-10.  I walked home with 5 contacts after about an hour and a half of operating.  It was only in the 50s and was damp so I got chilled pretty quick.  I was even using my gloves!  Still was a fun time to get out and operate some portable!
Which brings me to the next topic, the homebrew Buddistick!  When I first started working in Cedar Rapids during my first co-op session at Rockwell, I lived in a 3rd floor apartment and I worked with Budd, W3FF, to build my own homebrew Buddistick for my balcony.  The one I built worked pretty well, but didn't look too hot and was not exactly built to be very portable since I had not yet discovered the joy of such operation - nor did I have a rig that would really support it.  Eventually it fell into disrepair and eventually I found other means of getting on the air and wires became my main focus.  When I got the End Fed, it became my default portable antenna but lately I have found getting it into a tree is more difficult than it is worth due to that huge coil two thirds of the way down the wire, it always gets stuck somewhere.  This left me looking for another option.  About that time, I stumbled across the decrepit Buddistick in the garage and decided it was time to update that design.  Well since I built mine, Budd has updated the homebrew instructions and included a few more pointers.  Still, it wasn't quite exactly what I wanted.  I envied the commercial product because of its tapped coils and slick look but for $140, one can buy a lot of other ham radio stuff so I have passed.  Luckily, I devised a homebrew version that would work equally well, yet not look like a hunk of junk!  Below are the fruits of my labor:

Yet another development since my last post, my wife and I got a puppy!  His name is Marty and he's a Chinese Crested Powder Puff.  These are the dogs you typically see that are hairless.  Turns out the hairless gene is the dominant gene in a pair, with the powder puff variety being the recessive one.  He's about 7 months old now and still getting used to everything, and so are we!  He's come with a couple times to the park to radio and he'll continue to be a good companion on my radio outings.  He most enjoys sleeping under my chair when I'm in the shack, which is where he is right now in fact!

Ok, I think that is more than enough for one post!  I hope to have another one sooner than later.  Keep an eye out!  Hope to hear you on the bands.