The Collins Amateur Radio Club "Junk in the Trunk!"

Every year there's a Pre-Dayton swap meet held in the parking lot of one of the the Rockwell Collins buildings here in town and it is the first chance most locals get a taste of "hamfest season."  Usually there's about 20 or 30 people in attendance with maybe 10 or 15 with something for sale.  The goods are usually not all that good but it is fun to see everybody and you can usually find some deals or someone willing to give something away.

Today's meet was no different.  Weather was good, cool, but dry.  I brought along my HW-16 and VF-1 hoping to sell just to have some more radio cash handy but while I had many lookers, there were no takers.  I'm told I could sell it on eBay pretty easily for what I was asking, and I have no doubt.  We'll see if I do list it or not.

Now for the fun part!  I got there on time so that I could scope out the goods first and I was rewarded greatly for my effort!  I picked up a homebrew balanced antenna tuner that looked like it was just parts, but when I came home and hooked it up, it actually tuned!  I'll still take it apart and re-build it, making sure everything is working correctly.  It is in PI configuration now but I think I'll try an L configuration so I can use one of the air variables for a magnetic loop.  Yet another project to add to the pile, but hey, the price is right! 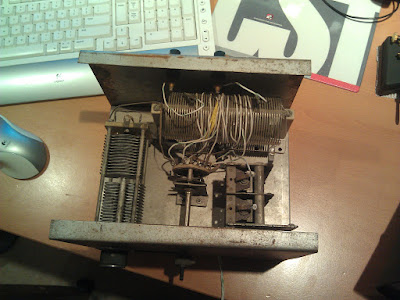 So like I said, I was going to sell my HW-16 and of course, some genius parks across from me with a deal I could hardly refuse.  A nice Ten Tec Century 21, working with a manual, only $75.  Not a bad price for a radio, especially one with a power supply built in.  For those of you unfamiliar with the C21, it is a "QRP" radio simply by the fact that it is not 100w but rather about 70w INPUT which equates to between 20 and 30w output, depending on the band.  The seller creatively put a short list of recently completed eBay auctions just to show how good a deal it was, all were over $100 + shipping.  Oh great... So I hemmed and hawed over this rig and walked around and stared and stared.... And it came home with me!  I talked him down to $50 so I figured why not. 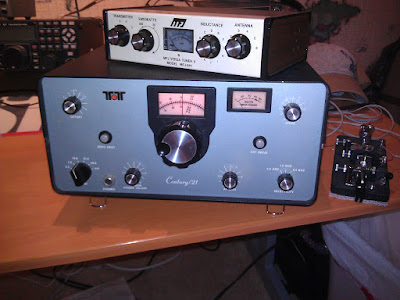 It is a bit bigger than the K3 so it takes up a bit more real estate on the desk but when the KX3 arrives, I should be good as far as that goes.

The C21 is a Direct Conversion transceiver for 80-10 (no WARC back then mind you).  As I mentioned, its a "low power" radio.  It has selectable crystal filters for 2.5 KHz, 1 KHz and 500 Hz and they work pretty well.  I took some video but the shack is kind of dark and it did not capture the audio as well as I had hoped but here it is anyhow!