I left you last having completed the installation of the vertical.  I'm pleased to say, it's still up!  And yes, I'm having a blast being back on the air.  Here's what I've been up to.

After getting the vertical up, I set to putting the SB-200 back on the air as well.  Last time I shared SB-200 stuff with you guys was when I just about killed myself by sticking my hand in the chassis with the HV power applied.  I definitely learned my lesson and took many extra precautions this time around.  Getting the SB-200 out of storage and converted back to 120v (no 240v in the new shack) I noticed the softkey circuit I had was not working, there was no keying action.  The circuit was powered by a 3v lithium coin cell so its no surprise.  I thought while I was in there, I'd rework the 12VDC power rectifier I built for the PC fans I put in there in our last blog post. 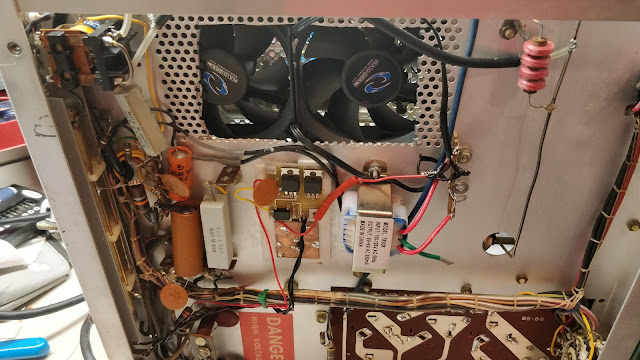 I decided to go full hog and just throw a 12v transformer, as well as cut out the case for better air flow.  This turned out to work a lot better than the way I had it hooked up before and I didn't have to worry about the filament voltage from being impacted in any way.  Unfortunately I did find out that you can't ground the DC side of the transformer to the case.  It took a while to find out why the fan would stop when transmitting.  In investigating all of that, I ended up going down to just 1 fan and I can definitely tell it works really well with just the one to keep the tubes cool.

Since I was running the amp on 120v I wondered if I could improve the performance with the lower source voltage.  With the exception of the soft key and the fans, I'd made zero modifications or updates to the amp.  Surprisingly the amp was totally untouched and working great all things considered.  And yet, I had picked up replacement capacitors for the power supply when I bought the amp at Hamvention so I figured it was time to just replace the aged ones in the amp.  You've probably seen pictures like the one below on the internet and I always thought, "oh that's a blown up cap," but it turns out that's just the glue that goes in the paper covers!  All 6 of the caps in my amp, did end up being absolutely fine, but I did find a bad diode which I also replaced. 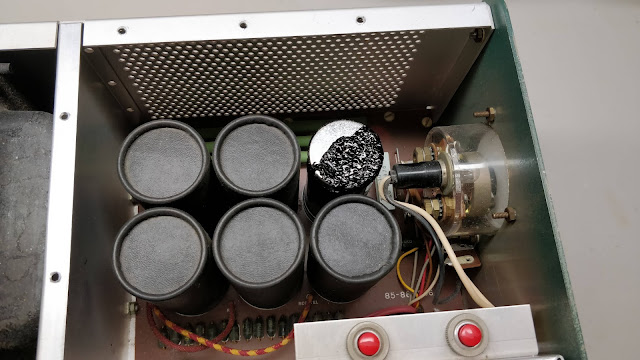 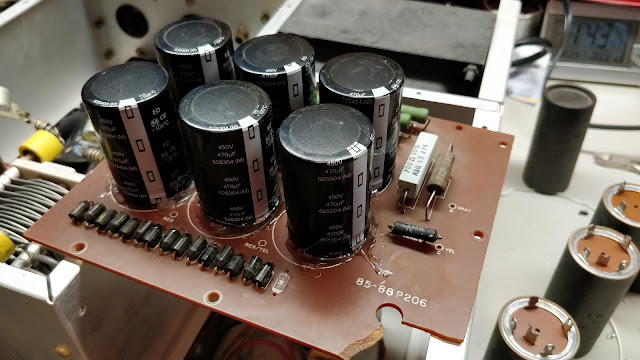 Everything else checked out and once it was all buttoned up everything looked great!  I got the amp back on the air and it didn't take long until I reached the limit of the 15 amp circuit to the shack and that was about it.  It became painfully obvious that I was just not going to be able to run an amp in the new shack without a more worthy circuit. And, do be honest, in all these years, I've not really enjoyed using the amp on CW.  Friends will tell you, I'm a little extreme about having a quiet shack and once you get rid of the fan noise, the SB-200 is silent...until the T/R switch goes off.  And man is it loud!  I seriously considered adding QSK but it turns out there's no "drop in" boards available anymore so I kind of went off the deep end... 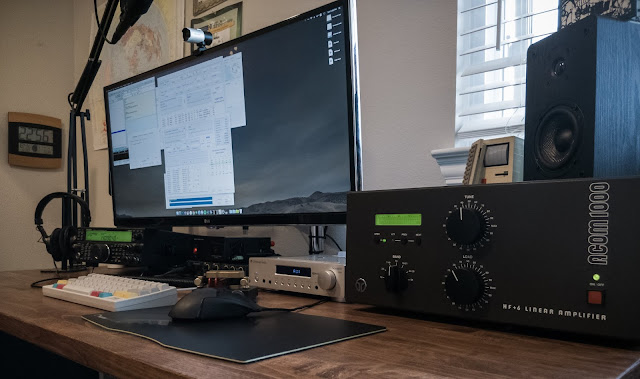