Hey all!  It pains me to say I have not been operating much (or at all...) lately.  I've just had such crummy luck from the apartment that the radio is rarely on anymore but to check JT65 a time or two.  There will be time for that soon though!  Our current lease is up in June so in March we're going to be getting serious about buying a house again.  This time there will be nothing keeping us from buying, we're going to do it.  Wish us luck!

I have been playing a lot with my shack setup though.  A few months ago I built my first computer.  I know, how could I, with all my kit building experience, have never built my own computer?  I don't have much of an excuse except that my affinity for OS X has made it kind of a non-starter but I figured it was about time.  I knew hackintoshing had come a long way in the last few years so I set out to build one. 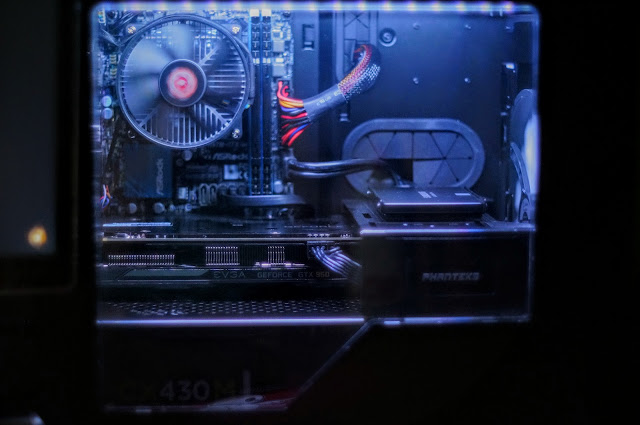 The biggest thing is to remember to use  known-good components and the rest is pretty straightforward.  My system is based on the Intel i5-4590 processor and ASRock H97m-ITX/ac motherboard.  My graphics card is an EVGA GTX-960. The whole thing is packaged in a Phanteks Enthoo EVOLV ITX case.  The whole thing looks amazing and performs just as well.  I've even got it set up to dual boot with Windows when I need that extra bet of gaming performance, and with both OS's on SSDs, it only takes a few seconds to swap between them.  Building a computer is so amazingly easy and fulfilling, I would really suggest you try it if you have not yet!

While researching all the components for my build, I came across a new trend that has been growing in computing: ultrawide monitors.  Your typical monitor theses days is 16:9 aspect ratio.  An ultrawide is 21:9!  I've been running two 24" 1080p monitors for several years as you've seen in my shack photos, but with this new machine, I thought it was about time to join the ultrawide army too, so I picked up an LG 34um94 from newegg on a lightning deal I couldn't pass up, and man, am I happy I did.  The monitor is 34" diagonal and 3440x1440 resolution.  It is a huge improvement over the dual monitor setup for productivity and gaming is so immersive.  Can't suggest it enough! 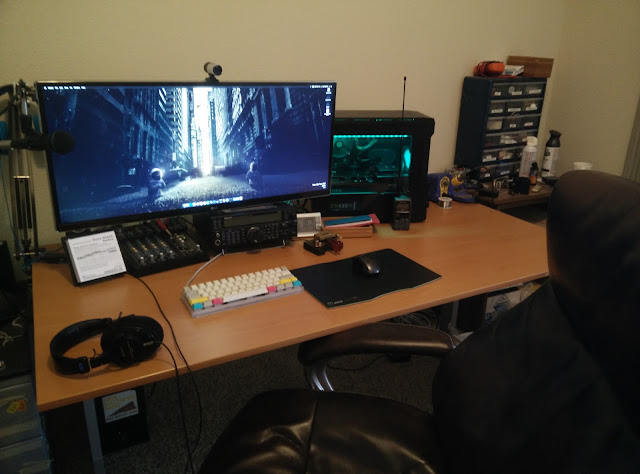 That's all for now. Keep an eye on the blog for house hunting updates!
Posted by TJ Campie at 8:29:00 AM