The Icom IC-7000, from an Elecraft fanboy point of view

It is no secret that I am a huge fan of Elecraft equipment.  I've used everything they make and built most of it too.  There's a reason they're the most popular radio for DXpeditions and there's a reason the fans are so... well, fanatical!

So you must wonder how it comes to be that I have anything but more Elecraft stuff in the shack.  Well, coincidentally, the CQWW DX  CW contest falls on the week before Thanksgiving in the US.  Usually the contest falls on Thanksgiving weekend making it nearly impossible for me to work.  Yet, as luck would have it, this year, of all years, my family decides to hold our family get together the week before Thanksgiving.  On the same weekend as the contest.  It seems I am just not meant to participate!

With those plans set in stone, I thought, "hmm I could operate mobile!" and thus, someone suggested I borrow the IC-7000 from the club at work to have a little more oomph (and admittedly,  fun) while mobile.  So to get a feel for the radio, I checked it out a little early and have been playing with it in the shack quite a bit.

The first thing you notice isn't the lack of buttons or front panel controls, it is the fairly nice color display.  While Elecraft really nails the usability in my books, the displays are pretty plane jane.  Still, they do just enough and just right in my opinion.  Still, the IC-7000 does have a nice look to it so I can't complain about that. 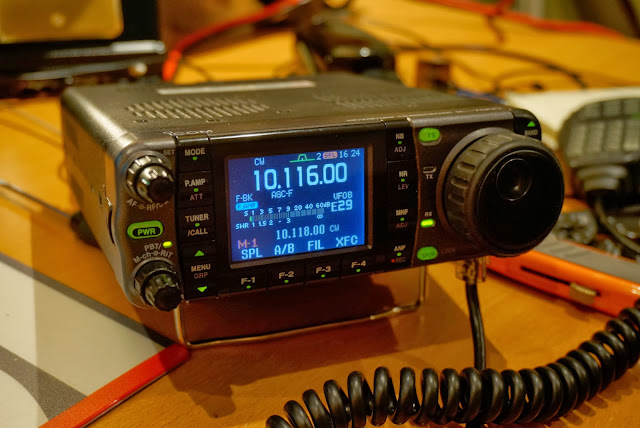 As one might expect, I did have to go to the manual to get the CW settings figured out.  I was probably the first person to check out the radio on CW so it was interesting to poke through the menus.  The Quick Settings (QS) button is accessed by tapping the AF/RF knob and then the F-1 key.  This gets you access to all the stuff you'd need: QSK,  keyer speed, power level and so on.  Yeah, its a "menu" but it isn't too bad to get in and out of.

OK, we've got the thing set up, lets send some Vs.. "vvv vvv vvv de w0ea"  Ehhhhhhh RELAYS!  Of course!  Yes, another radio that uses relays for T/R switching.  Why companies continue to make these I will never understand.  Yeah IMD suffers, but ask any CW operator and they'll tell you it matters.  I guess they're just phone rigs!

Still, I managed to use the rig quite a bit in the few days I've had it and the smooth 100w output has helped with some of the recent DXpeditions (still working on XR0ZR!).  Do I want one?  Not a chance.  The QSK performance is a dealbreaker.  Would I take it if it were free?  You Betcha!

Good thing there's lots of choices, because after all, its different strokes for different folks.
Posted by TJ Campie at 7:40:00 PM