A Special Event and A Magnetic Loop

Its been a while since I've updated the blog, sorry about the wait!

Not a lot of exciting news to report or anything unfortunately.  I've taken an acute liking to a certain computer game that has been distracting me from radio, but that's OK, absence makes the heart grow fonder, right?

The last 2 weekends  in September, Rockwell Collins celebrated its 80th anniversary since its incorporation in 1933 with a ham radio special event.  Rockwell Collins has 6 club stations in total: 2 in Cedar Rapids, IA (N0CXX, W0CXX), 1 in Tustin, CA (W6CXX), 1 in Melbourne, FL (W4CRC), 1 in Richardson, TX (W5ROC), and the only DX location in Toulouse, France (F6KNZ).  Unfortunately the French location could not participate in the event since their station is in a secure area that is not accessible outside of business hours.  We are offering a certificate if you have contacted 3 or more stations during the event so check your log, you just might have done it.  Check the club website for info about how to get that: W0CXX.us.  I operated the N0CXX station both weekends in the mornings, starting on CW then moving to SSB when the contacts slowed down enough.  It was plenty of fun and I think my spot at the K3 ended up with about 500 QSOs.  The whole event netted about 2,000 QSOs for the 2 stations here in Iowa.  I'd say that was a pretty successful event!  I would have liked to have more CW contacts but it seems most of the people interested in working special events are on SSB.

This operation brought to my attention something I had thought about before but never got off the ground: I transport my CW key fairly often and have no secure way to do it.  Over the length of a year, I take my key to the Farm for contests probably 5 or 6 times so I figured it was about time to make sure I could do so without risking damage.  One of the other Farm members suggested an outdoor store down in Iowa City to look for a nice plastic box (think Pelican).  Sure enough, I found a nice clear, waterproof box that would fit my key and K1EL WinKeyer Lite just fine.  With a little foam I found in a waste bin at work, I even made a nice snug custom-looking foam insert for the key.  I'm very happy with the finished product, pictured below. 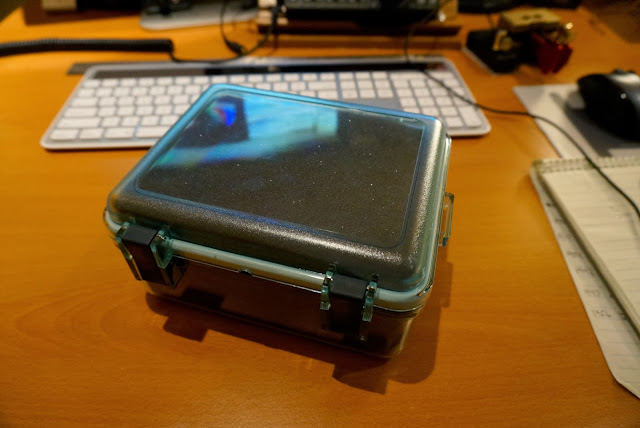 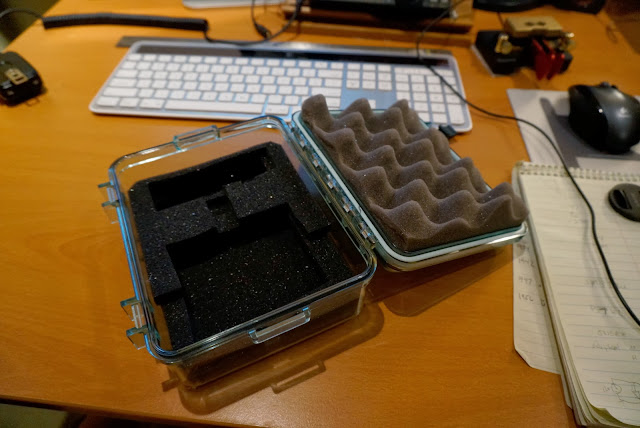 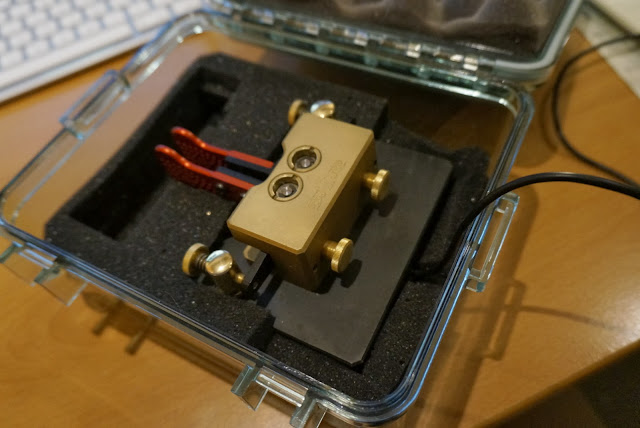 I've also been working on making a usable magnetic loop lately.  I think I have finally got something I can use and get consistent results from.  I ended up going to copper water pipe instead of coaxial cable for the loop element.  No, it won't be as easy to transport but I decided that wasn't as important as keeping the overall construction simple and durable.  The pipe I got is 5/8" diameter flexible water line and it was only $15 for 20 feet at Home Depot.  I cut the element for 12 feet circumference which by my calculations would result in about 58% efficiency on 20m, the main band I want for this loop.  It was a lot bigger than I thought it'd be when I got done so it is a little unruly to move around, but as my tests have shown, it works pretty well, so I'm not going to complain.  One problem I ran into was tuning the thing with a single gang, 20-350pF cap was nearly impossible since the SWR dip was so sharp, I could never quite get it.  Luckily, AK0M here at work was generous enough to give me a nice dual gang cap which gave me a slight reduction in tuning speed, and K0DAS hooked me up with a 4:1 reduction drive which gave me a total reduction of about 8:1.  This gave me just enough range to dip the SWR without a terrible amount of difficulty.  I could do with further reduction but this will work for now.  One of the main goals of the project was to get an antenna I could use on the deck at my home with my MTR which meant I needed a way to identify when I was tuned.  If you recall, I posted a while ago a bout the Tayloe SWR bridge I built.  It was intended for this project and you can see in the pictures below how it is incorporated into the loop.  For the ground plane I used a piece of copper tape and glued the manhattan pads where needed for the rest of the circuitry.  This is not a very good construction technique but it will work temporarily until I figure out a better way to do it in the small space available inside the box. 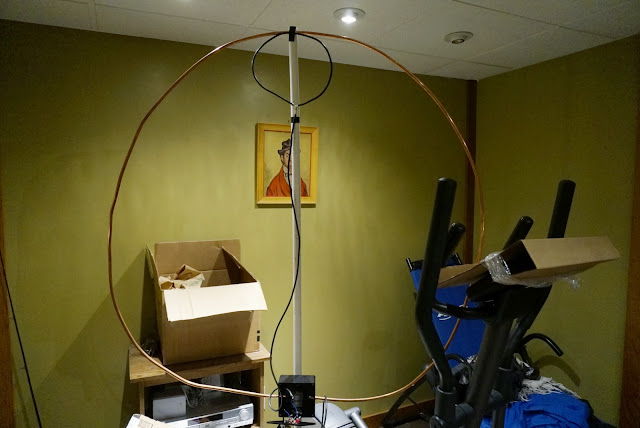 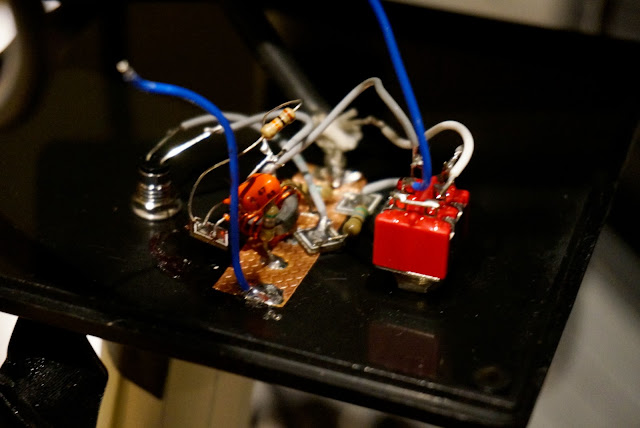 Sending a series of dits on the MTR I can find the SWR null on the LED without too much trouble, assuming the sun isn't super bright.  The LED is a bit tough to see in the sun so I may have to recess the LED inside the box so it is shielded from the sun better.  I will have to find some higher power resistors for the 50 ohm bridge since a couple of times I noticed some smoke coming out of the side of the box when tuning!

I ran the mag loop and the MTR in the QRP Afield contest put on by the New England QRP Club a few weekends ago and made enough contacts to consider it a success (something like 20 I think).  Unfortunately, it took a toll on the Lithium battery I use to run the MTR.  If you recall, when I cut the power wires off of it, I shorted them together (ONE AT A TIME!!) and I thought I got away without damaging any cells.  Well, it turns out one cell finally took a big dive and now is stuck at <1v when it should be about 3.5v.  Oh well, it was cheap!  Just remember to be careful with these batteries, they do have some pretty nasty failure modes that result in fires!

Finally, with September coming to a close, we have to look forward to the winter season quickly approaching.  I still would like to get my dipole down and remove the loading bit and re-tune for better SWR on 40m.  I'm not looking forward to it so I have been putting it off, but I don't have much time before it gets too late.  Enjoy the fall everybody!  Look for an update sometime in November probably after the Sweepstakes.