With Spring weather taking its sweet time to arrive (at least in the Midwest where it's been unseasonably cold), I finally got a chance to clean out the car and start thinking about preparing a mobile setup for the trip to Dayton for Hamvention next month.  I had an existing setup that worked relatively well for my KX3 that I posted about a while back but it lacked finesse and permanence. The "burger tray" solution wasn't very good since it was difficult to use without taking my eyes off the road for an extended period of time.  So I ended up using a suction mount to support the radio over the cup holder area in my truck instead.  This was certainly not ideal since the suction cup was prone to losing suction and I risked tossing my beloved (and expensive!) radio to the floor of the vehicle.  Not to mention, with extended use, the suction cup  was getting hard and would not support a good suction when cold.

So in preparation for the Dayton trip, I knew I wanted a better solution.  I spent a lot of time brainstorming how exactly I'd go about mounting the radio in various positions in the cockpit, but it became painfully obvious that there really isn't a good way to do it in any location except where I had it before.  That meant a truly custom solution.  As luck would have it, while I was in the camping section of Walmart just browsing while my wife picked up groceries, a rare flash of brilliance struck me.  I found a small nylon cutting board that could serve perfectly as the basis for my custom mount.  Not only was this a very valuable solution at only $3, I knew that with some liberal application of heat, I could form a piece of the cutting board into about any shape I needed.

Using parts from the existing suction mount, I mocked up the new mount with a piece of cardboard and found that it'd be a simple, one direction bend to get the angle I wanted.  Of course it took a bit more work than that but after about 20 trips back and forth to/from the garage to/from the shack, I had a piece of nylon board that was at the angle I wanted and fit in the space I had provided it.  Luckily I was able to screw it to the inside of the cup holder which will make the holes almost invisible if I ever decide to remove the mount.  The photo evidence is below.

This essentially replicates the location used with the suction cup mount but provides the stability that I desired.  Obviously, I'm pretty happy with it!

I also decided it was time to look into a permanent VHF/UHF mobile solution for the car.  I ran an Icom ID-208H for a while a couple summers ago when I had the radio on loan from the club at work, but that has long since returned to the club.  I don't have a great affinity for using repeaters or doing FM simplex work, but it is nice to have during the storm season and when travelling, so with some money I've garnered from building a few kits, I put the money down on a Kenwood TM-V7A thatI purchased from a local ham who was doing some "house cleaning".   Unfortunately he was unable to find the separation kit he thought he had for the rig so I had to homebrew my own.  The TM-V7A uses a proprietary cable set which has been unavailable for years, and what I have been able to find, were been beyond expensive for what it provides.  I figured if I was a real ham, I'd just figure it out.

And figure it out I did.  The head uses a 4 pin connector with spring loaded contacts, so I fashioned a piece of PC board with 4 tracks on it and soldered wires from some CAT5 cable, pressed it into the connector then glued a piece of an old credit card across the back of the head, securing the new "connector" to the back of the head (picture of this later).  On the main unit, the corresponding connector is just 4 contacts that the spring loaded contacts would press into.  I couldn't figure out a way to build a connector that would work for this one but I quickly realized there was room to just run wires to the back of the board that connector was attached to and solder directly to the board, so I just did that.  And as luck would have it, I actually managed to get it to work on the first try!

It was smooth sailing after that.  I downloaded the service manual for my truck and started tearing into the dashboard so I could discretely run the cable to the head and put the main unit under the passenger seat.  It was actually really easy, pretty much all the pieces are just clipped in.  I attached the head to the dash using EXTREME Velcro; hopefully it'll withstand the Iowa summer.  The head is extremely light so it should.  The end result was extremely satisfying: 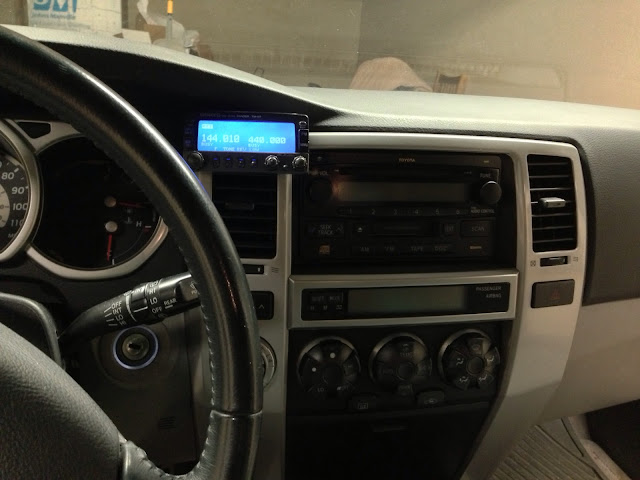 If we go back for a moment to the trip I took to Western Nebraska last summer (some of you know about this story already...) I had a little trouble with electrical power running to my radio which nearly resulted in a major catastrophe  but was narrowly averted by the quick thinking of my wife.  It turns out that while us QRP operators can often get away with minimal safety measures due to the low power nature of our operation  no shortcuts should be made when installing power runs in the mobile setting.  Alas, I had forgone the use of a fuse on my power cable to the battery out of pure laziness and it worked great for so long.  That day was to be the last day that I considered that an acceptable practice, for when we arrived in Omaha at the end of our first day of travel, a pure white smoke began billowing from below my seat and I quickly came to the realization that my truck was nearly on fire!  Something had shorted somewhere and it was quickly eating through the coating on the wires and melting itself into the carpet.  Of course I had no means of cutting the wire until my wife came to the rescue, materializing a set of nail clippers which when applied to the power cable at the battery, ended our near occasion of disaster.

I have learned from that mistake.  Through another friend at work, I got a really great 8 gauge power cable WITH a 20 Amp fuse already in line that was from an old Motorola service rig or something.  It took a lot of work but I did take a few pictures of the routing of the power cables for posterity.  I did get it all hooked up and there was no fire so I guess things will be OK for now!