First QSO at the New QTH!

So this weekend my wife and I moved into our first home and she had a great idea to also have her parents come out to visit at the same time so I've been very busy playing host as well as trying to unpack and settle down in the new digs.

Luckily, while my wife and most of her siblings went to The Amana Colonies, I worked on setting up the new shack.  The shack is in the basement in one of the spare rooms down there which, appropriately, has a unique world map motif: 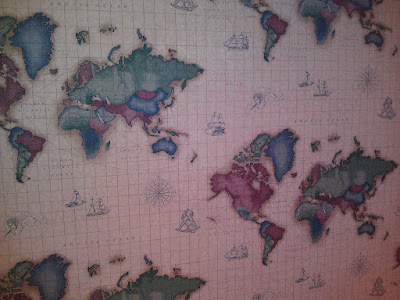 The new room is only about 8x8 feet so it is just perfect for a small shack and work area.  For the first time I'll actually have separate work and operating areas in my cozy little shack.  Here's the first preliminary shot of the shack: 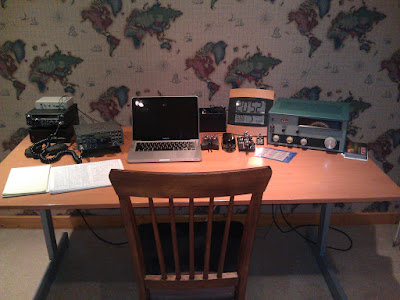 I haven't found my VF-1 yet in all the boxes from the move, but it'll turn up.  Once it does, the station will get moved around to accomodate and I may go back to the two-tiered setup of yore.

The idea for the antenna was to build an 80m doublet with some 450 ohm window line that I was given by a local ham.  I was saddened to find that there were a lot more power lines than I remember at and around this QTH so a simple install of a doublet was impossible.  So to hold me over until a more substantial installation can be made, I threw my Par End Fed Half Wave over a tree in the front yard outside of the shack.  I called CQ on 40m for a while but only received one very weak (2dB) spot at 5w in Ohio.  I switched to 20 and heard Mike operating K6JSS/3 in Maryland at about a 539/549.  I promptly gave him a call and received a hearty 599; it sounds like the antenna installation is going to work all right for now!