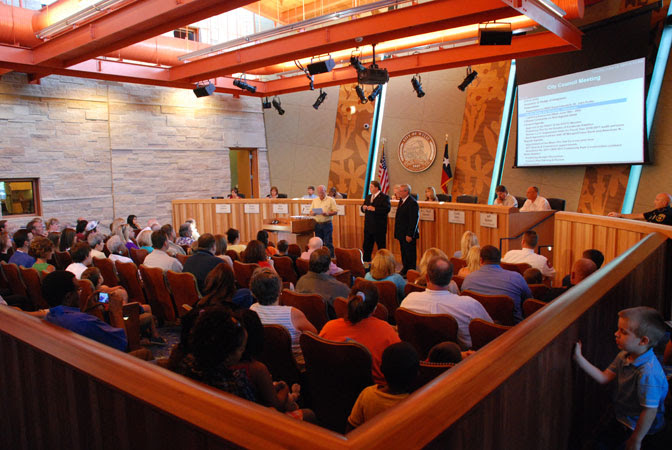 I'm sure many of you have heard through the grapevine (Reddit and Twitter) that I am currently engaged in a battle for my antenna.

A bit of background:

We chose this property very carefully.  A lot not subject to the overlords of an HOA, large enough to support a modest antenna installation.  A tower.  A receive antenna.  It met every requirement.  I read the city ordinance and while it was not ideal, I felt it met my needs.

As you know, I put up my Gap Titan DX in June, which I believed to be within my legal rights to do.  It has now come to pass that the city, and my neighbors, do not share this belief.

A few weeks after I first put up my vertical, a city code enforcement officer came to visit and informed my wife that the antenna was in violation of city code and would have to be removed or risk fines.  The same day I went to city hall to discuss it with the city planner.  Ultimately he and his staff came to the conclusion that my vertical antenna was (by their definition) an Amateur Communications Tower and would be subject to the zoning ordinance.

OK.  I didn't agree with this ruling but I had intended to submit an application for a legit Tower at some point down the road, it just meant I would have to do that now rather than later.  I put together a proposal for a 45' tower with a tri-band yagi and my ground mounted vertical.  My intent was that I would be able to have one or the other or both installed.  You know, flexibility.

So that was my proposal.  I submitted it and sat back and waited for the comments to come in.  Naturally, on my birthday, I get a message from the city planner that the comments have passed the threshold to require a super majority vote by the city council to approve.  The comments from my neighbors were all predictable: what about my home values... what about safety... etc.  All baseless and irrelevant.  It upset me to some degree because I just don't know why everyone cares so much but I also knew the law was on my side.

It finally came time to have the first public hearing at the Planning and Zoning committee meeting.  I gave my spiel and answered a few benign questions.  Only two neighbors showed up to speak against me and they both sounded more crazy than anything, and luckily the committee saw that as well.  They passed a motion to recommend approval to the city council 6-1.  I was surprised!

Fast forward 2 weeks and it was the day before the city council meeting.  That evening someone posted on the neighborhood Facebook page that there was this meeting the next day that everyone should attend, "THIS COULD PASS!" Dread rose within me.  I wasn't so confident anymore.  I knew there was a risk that my neighbors would band together to fight me and it looked like it was happening.  Of course I could have planned ahead better and had some support from other hams in the city but it really didn't look like there would be much opposition after the sparse turnout at the P&Z meeting.

The next day, at the city council meeting, they showed up in droves.  I think at least 10 people.  Again, I gave my statement, this time much better prepared.  I addressed all of the questions I was asked at P&Z and the comments from the neighbors.  It didn't matter.  I needed 6/7 council members to support me; one of them was absent, and another one seemed to have a personal vendetta against me when she asked me if a falling tower could hurt someone in 90 mph winds, as if you'll be just standing around outside (or in your house for that matter) during a tornado.  Then neighbor after neighbor came to the stand and proceeded to raise ridiculous concerns about safety, one going as far as saying he was afraid my antenna would fall in his brand new pool over 100 feet away!  To make matters worse, I was given no opportunity to refute any of their complaints.  The council voted to deny my application 6-0.

I sent the city planner a note when we got home and asked what the path forward from there was.  He said I can go re-apply with something different, suggesting I ask my neighbors what they would allow, or sue.

I met with a lawyer yesterday.  More to come as things develop.