Elecraft KX2: The end of kits for Elecraft? UPDATE: WITH VIDEO! 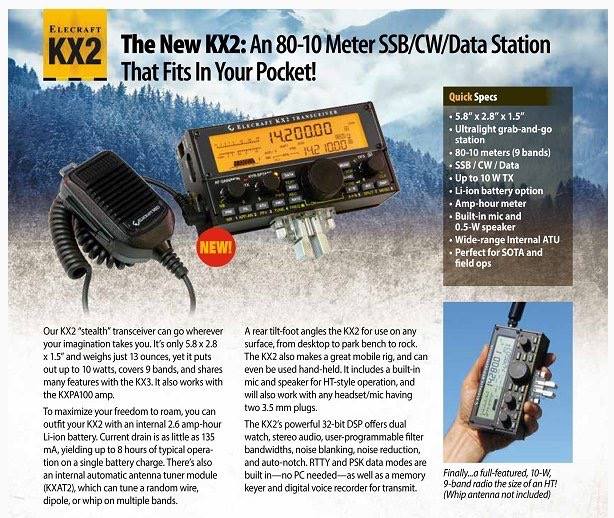 Elecraft has always offered kit versions of just about everything they make, until now.  The newly announced KX2 (not a successor to the KX3 or the K2 interestingly) is their first offering to come in factory built ONLY.

Expected to be priced at about $750, it seems they will be targeting the more mainstream ham market.

I'm sure they'll get a lot of gruff for leaving out 6m or 160m but I think those are reasonable to leave out.  The idea of a rechargeable lithium option sure sounds nice too.  Maybe this is the secondary radio I would want from Elecraft - something I won't ever use on my desk but is destined to be carried in the field.  At the $750 price tag, that option seems far more likely than it did with the KX3 at nearly 2x the cost.  We will see how it compares from a performance standpoint though if you're comparing it to just about any other radio (save KX3) it doesn't need to be a stunner in the RX department to be a winner.

I'm going to be keeping my eyes out for more details, so be sure to check back!