You all certainly remember my escapades from a few weeks ago working FO-29 from the roof of the parking garage.  Well it turns out I was having a few issues with SWR but I just chalked it up to crummy coax.  Then I tried to work SO-50 in the parking lot at work with one of my co-workers but it turned out to be a terrible demonstration too!  And finally, this last week, I gave FO-29 another shot from work and it too was a general failure with reports of a "weak" signal.  Now, don't get me wrong, 5w into a busy satellite isn't "big gun" at all and I'm used to weak signal reports but I should have been doing better.

So I threw out a quick feeler on the contest group to see if anybody had an SWR meter for VHF/UHF.  Sure enough, someone had one to loan and I picked up a Rig Expert AA-600 the same day.  It's a pretty slick piece of kit!

I put the ELK on the meter and sure enough, SWR was way out of spec.  No amount of fiddling made any difference.  I couldn't figure it out.  I went online and started checking some pictures and noticed something.  I was pretty sure my antenna elements were not on right!

I sat down, swapped out the screws, and hit the meter... Eureka!  The SWR showed <2:1 on both bands finally. 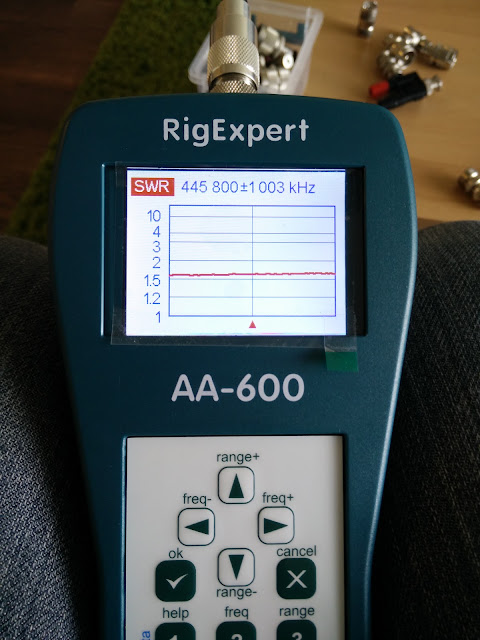 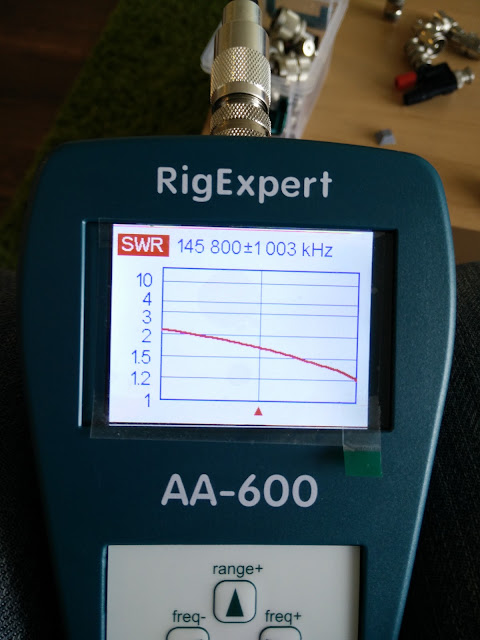 While I was at it, I figured I'd put my HT antennas on the meter too:

So interesting results.  I would have expected the Diamond antenna to be a lot better on 2m.  I suppose it could be the bevy of adapters I needed to get the thing on the meter to begin with.  It does seem to work pretty well anyway.

So that's it for now, listen for me on the next satellite pass!
Posted by TJ Campie at 5:07:00 PM