Well folks, we're quickly approaching the end of the year, and as usually, it has gone too fast.  This will probably be my last post before the new year so I'll go ahead and make it the one where I summarize the year in radio for me!

First off, let's review the "New Year Resolutions".  Of course, I didn't even have a post on here reviewing them so this is from memory.  I should probably write them down next time!


40 WPM Copy
This has always been a very lofty goal.  It's certainly achievable and wouldn't even take that long if I focused, but unfortunately this will not happen this year.  I've made other posts on this subject but as a QRP operator, finding others to QSO with at this speed is difficult to say the least.  My addiction to DX does not help either as I find long ragchew QSOs to be a little monotonous, even at high speed.  I'd like to keep this as a goal for 2014 but I will not likely put much work into it, as in the past.  Realistically my 30-35 wpm copy I currently maintain is about as good as it gets for normal operation.

Operate portable a lot more
I think I did a fair job of achieving this goal.  I spent a lot of time at the park especially while I was building my end fed antennas.  Still, this will always be on the list for next year.  I should be shooting for 2-3 times a week I think.  We'll have a lot of stuff to work on the house next year so I'm really hoping I can keep on top of it!

Go to Dayton
Yes!  This year's Dayton was amazing.  I didn't have much to buy, just some rope, but the fellowship was fantastic.  I can't imagine a more fun group of people to hang out with.  I got to meet a lot of the guys from the QRP Foxhunts which was cool.  Of course it was great to see wG0AT again, as well as the other QRPers at FDIM.  I really look forward to 2014 Dayton.

Put up a real antenna
Another yes!  My hexbeam has been GREAT.   In 2013, I've worked 131 DXCC entities.  If that isn't proof that the antenna works, I don't know what is.  A few weeks ago, I upgraded the rotor to an old Ham-M which is further making the operation of the station that much more enjoyable.  I can't really sing the praises of this antenna more.  Only thing I wish I could do is get it about 10' higher.  We were going to when we put the new rotor on but the mast I have just isn't made for that.  Something to think about in the future.

Finish my amplifier
Now this one is a thorn in my side.  I really wish I could get in the mood to finish the little guy but I'm just not feeling it.  I think I'll let this one rest on the shelf for a while until I feel like working on it.  Not a huge loss.

So in all, I've kind of shirked my goals this year.  That said, I've had a great time working tons of new DX.  The new antenna really changed how I operate and ratcheted up the fun factor.  It is amazing to know my little puny signal can shoot across the globe at light speed and touch the ears of another ham thousands of miles away.  Ham radio is magic.  I just love this hobby!
___________________

In other news, I've made a major upgrade to the shack computer.  I've been using a 2008 iMac that I got new back in 2009.  The computer has done me well but lately I've been gaming a bit more and it just wasn't cutting it.  The new computer is a 2012 Mac mini, 2.6 GHz i7, 16 GB RAM, and 240 GB SSD.  The new computer is amazing!   I have not tried yet, but I think it would easily support running Windows in a virtual machine for NaP3 or similar software panadapter.  Along with the awesome machine, I got two 24" 1080p monitors for tons of screen space.  I can put all my ham stuff on one monitor and keep it up all the time, making watching for DX spots super easy.  Here's a shot of the current shack configuration. 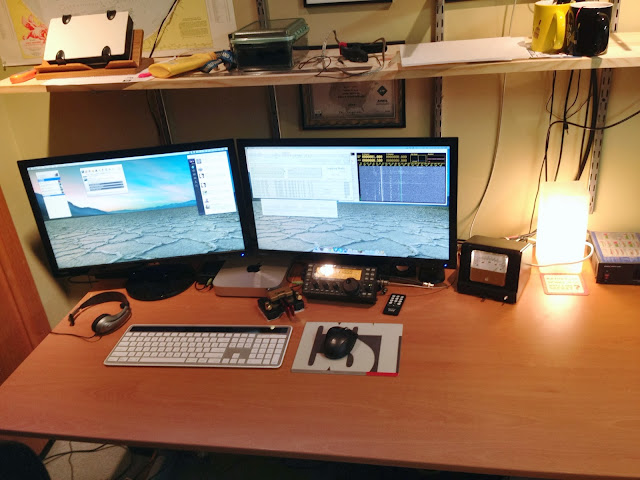