Today's blog entry will focus on Steve "Melt Solder" Weber's new Mountain Topper Radio (MTR for short).  The MTR is another fine radio in the AT_Sprint lineage and I've seen it described as a sort of "ATS3c".  It is a 2 band - any pair from 80, 40, 30, or 20 - 5w Altoids tin transceiver with RIT, a DDS VFO, 3 keyer memories, and even the capability to do PSK (with external hardware).  Of course this is a surface mount kit but don't let that put you off!  I was a bit aprehensive myself but found the assembly to be very enjoyable, though it was somewhat challenging.  You don't improve if you don't try new things!

The radio took me about 8 hours to build I think, but that sounds like a lot.  I did not use tweezers so it made placing the parts a bit difficult and I think that made it take longer.  No less, I enjoyed every minute of the build and had absolutely no problems following the instructions.  This is something you CANNOT do without a maginfying glass or microscope though!  I would have been lost without one.

So after the build process, the calibration and setup is pretty straightforward.  A second receiver (a KX3 in my case) is all you need really, though some other equipment comes in handy peaking the receive filters.  On first power on, the DDS was already within 100Hz of the desired frequency and once I calibrated it, RBN spots showed me right on frequency, which is always nice.  I hooked it up to my 4SQRP QRPometer and my 8 NiMH cell pack at 10.1v and read 4w on 20m.  Really stellar performance for a radio that fits in an Altoids tin!

About that Altoids tin... They're great for QRP rigs, sure, but pretty ugly and I wanted something more fitting of the classiness of this radio!  On a whim, while my wife was at the grocery store, I went to Lowe's to look around and I quickly found the ideal case.  It was a gift card holder with a plastic window in the top.  Its a bit bigger than an Altoids tin but that gives you a little more room for the connectors and stuff.  Well, lets just get to the good stuff: 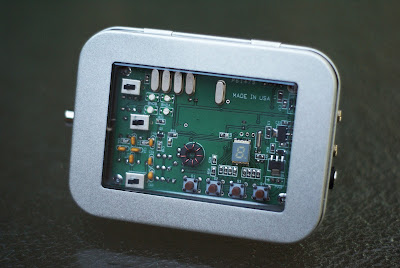 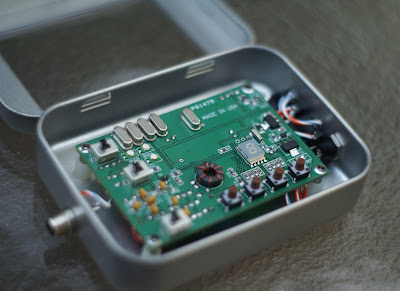 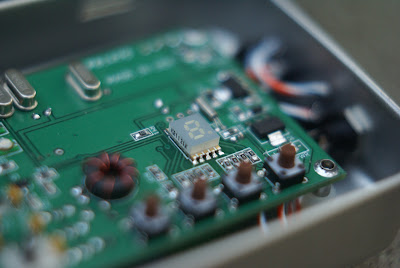 So it looks great, but how does it perform?  This is a real radio!  It is a little strange to say but I really have not touched my KX3 since the MTR came to the shack!  Obviously it doesn't replace it but it certainly performs better than I imagined it would.  Steve is supposed to be putting out another run of the kit in the fall so join the AT_Sprint Yahoo group to be the first to know about it!  The first run was just $110 but I think this is a great radio at $200 so who knows if he'll raise the price.  I put the manual with all the details on my dropbox http://db.tt/dO9Qp6ne
Posted by TJ Campie at 8:49:00 PM