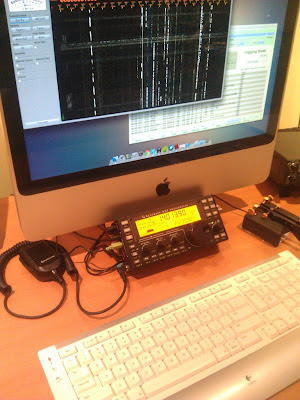 As you can see above, KX3 SN 288 lives!  The build was a sucess as was the video stream.  I was very honored and pleased to see Eric, WA6HHQ (Elecraft Co-Owner) along for the ride.  I also got a note from the test techs at Elecraft who were also watching.  The kit went together very easily with the exception of one thing: they forgot to send the BNC assembly.  Eric graciously shipped it to me overnight and it was received at 7:15 AM the next day, in time for me to show off the radio to my QRP club.

My first QSO was with Guy, N7UN, who was also watching the feed.  I was on battery power and had not set the battery alarm to 8.5V as suggested so I was getting the BATT LOW note and turned the power down to just 2 watts.  Was nice to have the first QSO be 2xKX3!

You can watch the entire video of the build below (the action starts at 8 minutes).  The entire video is 3 hours and the calibration step is cut off at the end.  Calibration is really simple though.  I would say that the build should take no longer than 3 hours.  I was taking my time and I did have to stop and solder together a BNC connector to replace the one that was not sent so that took some time.

The radio really is a gem.  I'll write a full review when I've had more time with it but so far, not much to complain about.  More to come.