For a few months, I have been thinking about a future project to overhaul my shack.  In our new house, I'm in a great sized room for a radio shack and it was appropriately covered in a map motif.  As nice as it was, the carpet was bulging in the middle of the room which made it impossible to roll over and the wallpaper was not well applied so the edges were peeling up here and there.

As luck would have it, my XYL found a super deal on some used carpet tiles, $100 for about 500 square feet!  They're a nice low pile green with built in pad so they're not bad to stand on but still stiff enough that the office chair rolls very easily.  Last night, after picking up the tiles, I quickly got to work tearing out the carpet and removing the wallpaper (ugh!).  Remind me to never put up wallpaper!

After about 6 hours of work, at 12 AM, I had finally removed all the wallpaper and the carpet and pad was gone.  All I needed to do was patch up the walls which were pretty scarred from the walpaper ordeal and pull up the tack strips from the original carpet.

I awoke at my normal time of 5:30 AM and wrestled myself out of bed for some breakfast and then patched the walls.  By the time I was done, it was late enough to get to the home improvement store for a crowbar to get the tack strips up. (It is always nice to buy a new tool when you've got a rather small tool collection as a new home owner!)

Then came the paint.  I hate painting.  I never seem to do a good job even though it looks spot on when its wet.  I always miss something.  This was no exception.  We just painted our living room a light green color called "Lion" and I figured it'd fit the tiles pretty well so I just used the leftover for my shack.  It needs another coat but it does really go well with the new tiles.  Whether it be out of laziness or fear of being off the air for more than a few hours on the weekend, I just moved everything back into the room and I'll do the 2nd coat of paint someday in the future. 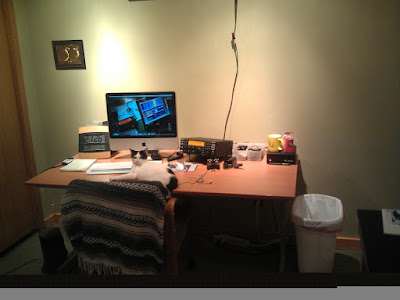 I also took the opportunity to rearrange my built in shelves a bit, giving my 2 vintage rigs a bit more of a "showcase" feel.  I have already listed my HW-16 for sale and I will likely part with the Century 21 before too long, I really don't have a use for big clunky radios especially when I get my KX3 (or should that be if). 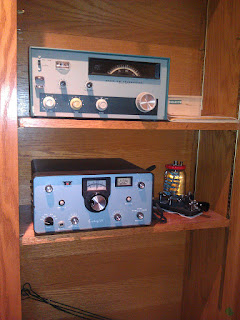 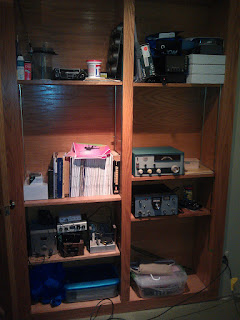 I need to get some frames so I can put up some certificates I've earned and save a space for my QRP DXCC award which I should be completing in the next few weeks if all goes well, I think I'm only down to 4 more entities. 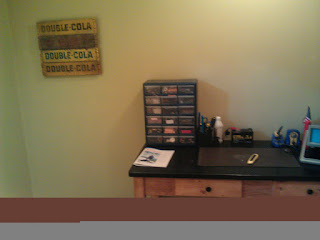 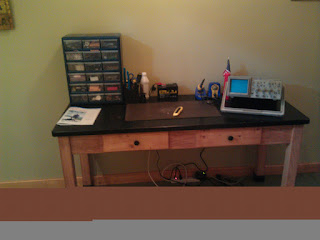